Tom’s Galveston Real Estate Owner and Broker Tom Schwenk is featured in the March 2018 issue of Outsmart with a wonderful article about his new business. Tom is proud to hit the headlines and says Outsmart has done a good job of capturing the customer and community focused ethos of his real estate company.

You can read the Outsmart Magazine article below:

“Galveston Realtor Tom Schwenk launches his own company—so he can give back more. 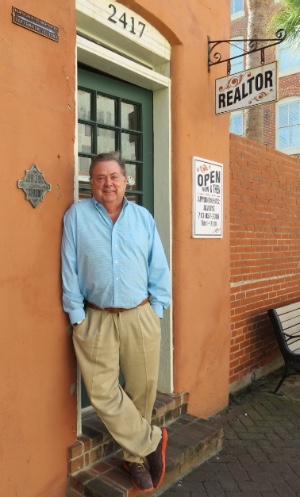 That’s Tom Schwenk’s motto, and he lives by it. In addition to being one of Galveston’s top Realtors, Schwenk is a one-man advertising campaign for the island.

“It’s just a really cool little city,” he says. “There’s so much to do, such a diverse population, and so much history.”

Retired from the corporate world, Schwenk obtained his real-estate license in 2003 and his broker’s license in 2013. He worked for his friend VJ Tramonte as an agent before joining The House Company. In January, Schwenk hung out his own shingle at Tom’s Galveston Real Estate.

“I never really thought that, at 61, I would open my own company, but here I am,” Schwenk laughs. “I’ve got an office on The Strand in the historic district, and four employees.” He specializes in buying and selling houses and leasing residential and commercial properties.

A New Jersey native, Schwenk moved to Houston in 1984. Although he enjoyed his time in Space City, it was Galveston that he loved.

“I had friends who had a home here, and they invited me down one weekend,” Schwenk says, adding that he bought his own island home in 1987.

In 2001, Schwenk and his husband, Jack Bell, moved to Galveston permanently and officially became IBCs, or “Islanders By Choice.”

Schwenk and Bell married on their 30th anniversary, following the U.S. Supreme Court’s Obergefell marriage-equality decision. They live in an 1882 Victorian in the San Jacinto area bounded by Broadway, Seawall Blvd., and 23rd Street. It’s one of the oldest neighborhoods on the island, and one of the hardest-hit by the Great Storm of 1900.

“Our house actually burned down, but was rebuilt with the exact same plans in 1903,” Schwenk says. “We renovated it when we bought it 34 years ago.” The couple lives there with a four-pound poodle that they named Spike (because, as Schwenk says, little dogs need a tough name).

Besides all of their community work, they enjoy the island’s burgeoning restaurant scene that features everything from longtime mom-and-pop eateries to elegant Tilman Fertitta restaurants.

“One of our favorites is Rudy & Paco on Postoffice Street,” he says. “And Miller’s Landing, and so many more. Plus, you can always get fresh fish at Katy’s Seafood Market and cook at home.”

Schwenk regales buyers with all that the island has to offer in terms of housing options. There are historic Victorians, quaint beach bungalows, and high-rise condos with stunning views of the Gulf of Mexico. As for activities, Schwenk claims there’s no better place than the island for bird watching, water sports, fishing, historical tours, and art walks. And of course there are the annual events like Dickens on the Strand and Mardi Gras that entertain locals and draw scores of mainlanders. But simply walking along the seawall is his personal favorite.

“I start each day with a walk by the water,” Schwenk says. “Then, it’s really just work and hanging out in our neighborhood. It is a very diverse neighborhood, and someone is always throwing a porch party. And then Jack and I usually have a community event to go to every night.”

“I love Galveston,” he says. “It’s just a great island, and it’s so easy to get involved in the community here. I also donate to a lot of charities—mostly quality-of-life issues, but also the arts and children’s causes. I pretty much give money to anyone who asks. That’s really why I started my own company at my age, so I have more money to give back to the community.”