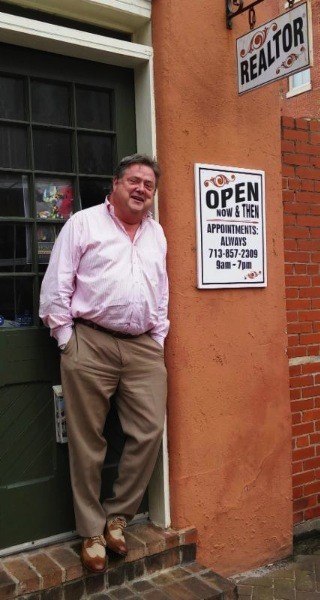 When I considered writing about Tom, I felt stumped. Not because I didn’t know what to write, but because there’s so much. He’s a larger than life character with a smile as big as Texas. Along with a laundry list of accomplishments and civic duties, he inspires one to pitch in and do their part in making our city even better.
In 1987 he and his partner, Jack Bell, made Galveston their home, where they fell in love with their 1904 Victorian house in our San Jacinto neighborhood. He pointed out that even though back then the area was not as renovated as it is now, it was still a great place to live with many of his neighbors being longtime residents from the forties and fifties. He feels San Jac has a soul with every person feeling welcome.

Tom is a serial entrepreneur, reinventing himself every few years, so even though his plan was to retire to the island from his career as an interior decorator, he soon became a national and international consultant. In 2011, he began his career as a Realtor working with the House Company, and is now in the top three in sales in the city and the go-to-guy for historical houses.

Spurred on by his love of the island combined with a strong sense of concern for his community, Tom lends his time and energy to countless enterprises. Whether it is to support the arts with the Galveston Symphony, to help preserve our environment with Galveston Island Nature Tourism, Artist’s Boat, Galveston Sustainable Community Alliance, to lend leadership to the Galveston Historical Foundation, GAIN, San Jacinto Neighborhood, the Downtown Partnership, and the UTMB President’s Cabinet, or to sponsor Santa’s Toy Drive and Pub Crawl, and the Beach Revue, which is this weekend, he is always looking for new ways to help out.

So you can see what I mean when I say it’s hard to sum up what this generous hearted man is up to. We can all be grateful to be able to call Tom our neighbor and friend.