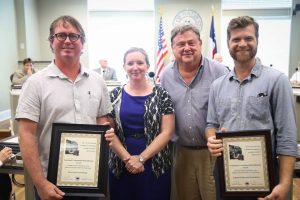 As Chairman of the City of Galveston’s Landmark Commission, Tom plays a hands on role in helping preserve the historic houses and landmarks that make the city so special.

In the third week of June the Landmark Commission recognized those who have made significant investments in historical preservation over the last year.

Tom says presenting the awards is hands down the favorite part of the job for him!

This year awards went to:

The home at 3608 Avenue O was on the City’s demolition list and the before and after transformation is quite incredible.